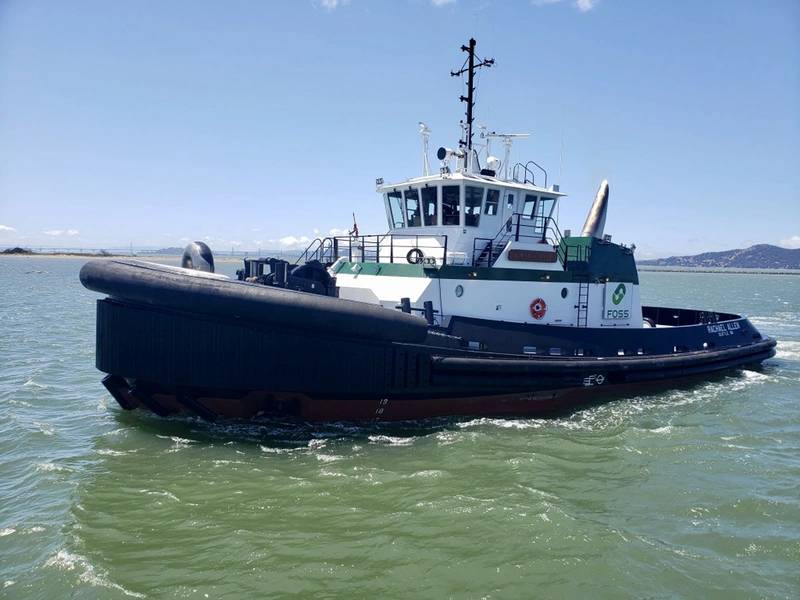 A TUG WITH AUTONOMOUS CAPABILITIES

Delivered in June, the newly built 90-ton bollard pull Rachael Allen—the fourth in a series of ASD-90 Z-drive tractor tugs built at Nichols Brothers Boat Builders, in Freeland, Wash.—features Sea Machines Robotics’ SM300 autonomous-command and -control system. The system’s capabilities include transit autonomy, as well as remote access of the tugboat’s onboard machinery, a feature that allows personnel to manage and support operations from anywhere on board the vessel or from shore. Navigation obstacle detection and avoidance capabilities also come standard.

Tapping into the remote command and control capabilities, Foss will use its existing Fleet Monitoring Center personnel to monitor the tugboat’s systems and operating domain via streaming video and sensor data. According to Foss and Sea Machines, the system enables an extra set of eyes and hands to have access to vessel command and control, allowing Foss and the Rachael Allen crew to maximize productive time, safety and crew welfare.

“While we are not working on a fully autonomous tug, [the Sea Machines systems] allow our crews to use autonomous features to make their jobs safer. Our mariners are the key to our success, and we believe the Sea Machines products will help them carry out their day to day operations,” said Will Roberts, president, Foss Maritime.

The Rachael Allen has been delivered with the SM300 and supporting hardware fully integrated, but the capability of the technology will be activated in stepped phases over the course of six to nine months to ensure full visibility and acceptance from all operational stakeholders.

“Our work toward integrating the autonomous controls . . . continues with our partners at Sea Machines, the U.S. Coast Guard and ABS,” Roberts said. “As a safety enhancement that incorporates new and novel technology, we are testing out a tool to support our crews, which comes from a system processing digital information to enhance safety of navigation. We are excited about the tools this system brings to our mariners in their service of our customers. We will work closely with regulatory agencies and third-party auditors to thoroughly vet the system as we continue to move toward full operational use of the SM300 on board.”

“Our technology has been in use aboard commercial vessels around the world for nearly three years and is backed up by thousands of hours of testing and validation. This is yet another real-world example of how Sea Machines autonomy is reshaping the way work is being done by vessel crews on the water.”

Sea Machines noted the Rachael Allen project marks its fi rst installation of an autonomy system on a vessel over 5,000 horsepower. Designed by Jensen Maritime Consultants, the 100- by 40- foot tractor tug will be able to escort the largest tankers and containerships calling the U.S. West Coast ports that it will serve. The vessel is outfi tted with two MTU Series 16v4000M65L EPA Tier 4 main engines, producing 6,866 horsepower and coupled to Kongsberg US255 azimuth thrusters.

The MTU selective catalytic reduction (SCR) system provides optimization of the engine delivering improved effi ciencies, fuel consumption is reduced by 8% at full power and 14-22% over a wider operating range compared to previous MTU engines in this power range. The MTU engine and SCR are designed with a high focus on noise reduction, standard features such as resilient mounting, turbocharger air intake silencers and the SCR insulation and noise abatement, all combined to produce noise levels throughout the vessel without any traditional exhaust silencers. The MTU engines are also equipped with MTU Go, a MTU digital monitoring system and service that allows continuous monitoring of the engines including all engine parameters and alarms, with trending and broadcast of engine alarms through the MTU Go App.

Rachael Allen is outfi tted with Mackay Marine Electronics, and towing equipment consists of a Markey DEPGF-52R winch with 750 feet of 10-inch synthetic line on the bow and a Markey DEPC-32 stern winch with 250 feet of 6.5-inch circumference line on the stern. The tug is built to U.S. Coast Guard Subchapter “M” regulatory standards, with ABS loadline certifi cation and UWILD notation.